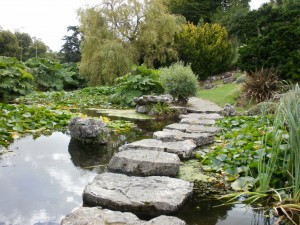 Rookery Rock Garden is Britain’s largest municipal rock garden located on the opposite side of Preston Park. It is built on a steep slope that runs up to the railway line. It’s an amazing creation, but is often overlooked by those using the park and is unknown to the most of people driving to and from Brighton.

Rookery Rock Garden was originally landscaped in 1935 by Captain B Maclaren. It contains from over 1350 of imported Cheddar stone. There is a large fish pond with stepping stones, colourful fish and pond lily, lots of winding paths and steps and a cascade. The garden overall has a mostly oriental theme, although the types of plant include more ordinary bedding plants as well as alpines. There are lots of benches to sit on and there are good views from the upper levels – about 100ft (30m) from the road to the top of the garden. There is couple of twisted paths which take you alongside streams, bridges, stepping stones and lots of unusual rocks, plants and flowers. There is as well a small house in the middle.

It is really nice place to relax, enjoy at least couple of minutes  and litlle bit of nature.